After graduating with a first class honours degree in Music from Goldsmith’s College University of London in 1993 I went onto play piano and keyboards in ensembles all over the UK and Europe, supporting a variety of major acts and playing for signed artists. I’ve performed at some of the most prestigious London venues (The Dorchester/ The Ritz / The Savoy / The Waldolf) and most of the well known wedding venues throughout Essex.

Now a qualified and practising teacher of music I have built up a wide and varied musical repertoire including jazz standards; songs from shows and musicals, music from the Western Classical tradition and well known pop tunes of the twentieth century right up to the present day.

Make your wedding special. Contact now to get a quotation and check that your date is still available 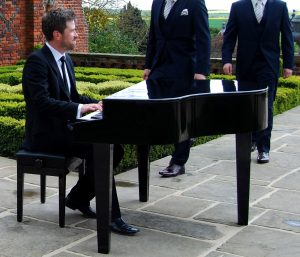 ‘Ideally, your pianist will be based near to you so that you can meet with them if you need to’.